Tomato's wild ancestor is a genomic reservoir for plant breeders 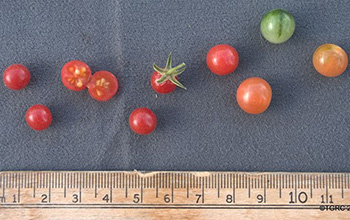 The fruits of Solanum pimpinellifolium, the wild ancestor of modern cultivated tomatoes.

Although today's tomatoes are larger and easier to farm compared to their wild ancestor, they also are less resistant to disease and environmental stresses like drought and salty soil.

"This reference genome will allow researchers and plant breeders to improve traits like fruit quality and stress tolerance in the tomato," said Fei, "for example, by helping them discover new genes in the modern tomato as well as by reintroducing genes from S. pimpinellifolium that were lost over time as S. lycopersicum was domesticated."

Although other groups had previously sequenced S. pimpinellifolium, Fei said this reference genome is more complete and accurate, thanks in part to cutting-edge sequencing technologies that are able to read very long pieces of DNA.

"Many known traits of the tomato are caused by structural variants, so that is why we focused on them," Fei said. "Structural variants also are understudied because they are more difficult to identify."

Fei's group compared the S. pimpinellifolium reference genome to that of the cultivated tomato, called Heinz 1706, and found more than 92,000 structural variants.

The researchers then combed the tomato pan-genome, a database with the genomes of more than 725 cultivated and closely related wild tomatoes, and discovered structural variants related to many important traits. For example, the modern cultivated tomato has some genomic deletions that reduce their levels of lycopene, a red pigment with nutritional value, and an insertion that reduces their sucrose content.

Added Diane Okamuro, a program director in NSF's Division of Integrative Organismal Systems, "This is an example of how advances in sequencing technologies allow us to harvest new genomic information from wild species to better understand how crops have adapted over the millennia to diverse environments."