Ocean pollution is a complex mix of chemicals and materials, with far-reaching health consequences 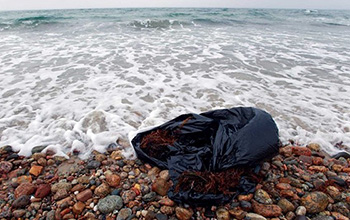 Marine plastics, one form of ocean pollution, are increasing by 10 million metric tons per year.

For centuries, the oceans have been viewed as an inexhaustible receptacle for the byproducts of human activity. Today, marine pollution is widespread and getting worse and, in most countries, poorly controlled, with the majority of contaminants coming from land-based sources.

Those are the conclusions of a new study by an international coalition of scientists taking a look at the sources, spread and health impacts of ocean pollution worldwide.

The study, funded by the U.S. National Science Foundation and U.S. National Institute for Environmental Health Sciences, is the first comprehensive examination of the impacts of ocean pollution on human health. It was published in the Annals of Global Health.

"This paper is part of a global effort to address questions related to oceans and human health," said Woods Hole Oceanographic Institution toxicologist John Stegeman, a co-author of the paper. "Concern is beginning to bubble up in a way that resembles a pot on the stove. It's reaching the boiling point where action will follow where it's so clearly needed."

Despite oceans' importance in supporting life on Earth and their size -- more than two-thirds of the planet is covered by water -- seas are under threat, primarily from human activities. The paper, which draws on 584 peer-reviewed scientific studies and independent reports, examines six major contaminants: plastic waste, oil spills, mercury, manufactured chemicals, pesticides and nutrients, as well as biological threats including harmful algal blooms and human pathogens.

The report concludes with a series of urgent recommendations. It calls for eliminating coal combustion, banning all uses of mercury, banning single-use plastics, controlling coastal discharges, and reducing applications of chemical pesticides and fertilizers.

It argues that national, regional and international marine pollution control programs must extend to all countries and where necessary be supported by the international community. It calls for robust monitoring of all forms of ocean pollution, including monitoring by satellite and by autonomous drones. The study was also funded by the Centre Scientifique de Monaco, The Prince Albert II Foundation and Boston College.