Researchers tracked coral colonies on reefs during an El Niño 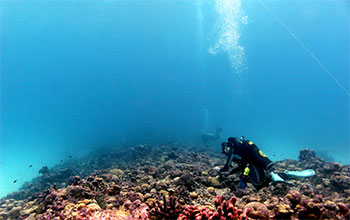 Some corals managed to survive a globally unprecedented heatwave, report scientists in a study that provides hope for the long-term survival of coral reefs.

"The devastating effects of climate change on coral reefs are well-known," said Julia Baum of the University of Hawai‘i at Mānoa, senior author of the study. "Finding ways to boost coral survival through marine heatwaves is crucial if reefs are to endure the coming decades of climate change."

Published in Nature Communications, the study reports discoveries made by researchers as they tracked hundreds of coral colonies on reefs around Kiritimati (also known as Christmas Island), through the 2015-2016 El Niño. Heat stress from the El Niño triggered a global coral bleaching event, causing coral mortality on reefs around the world. Its epicenter was Kiritimati, where the heatwave lasted an unprecedented 10 months.

Corals are sensitive to the temperature of the surrounding waters. During a heatwave, corals release the microscopic algae that live in their tissues, causing the corals to turn completely white, a phenomenon known as coral bleaching. Prolonged bleaching often causes corals to die from starvation as the microscopic algae provide sugars that support their coral hosts. If the corals can reclaim their food source within a few weeks, they can usually recover.

To date, coral recovery from bleaching has only been observed after heat stress subsides. "Observing corals recovering from bleaching while still in hot waters is a game-changer," said Baum.

Added Daniel Thornhill, a program officer in NSF’s Division of Ocean Sciences, "During this hot temperature recovery, the corals changed the kind of symbiotic algae they host to a more heat-tolerant species. It’s an amazing example of recovery."

Baum adds that corals only exhibited this capacity if they were not also exposed to other types of human-caused stresses, such as water pollution. Until now, it’s been unclear if local reef management could help improve corals’ chances of surviving climate change.

"We’ve found a glimmer of hope that protection from local stressors can help corals," said Baum.

The research was partially supported by a U.S. National Science Foundation grant.