Applying compost to landfills could have environmental benefits 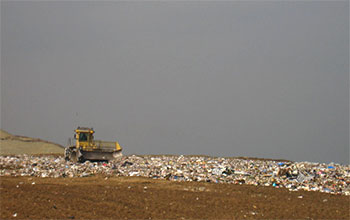 Applying compost to landfills could have environmental benefits.

Many people think of composting organic matter as a way of keeping solid waste out of landfills, but a new U.S. National Science Foundation-funded study by North Carolina State University scientists finds there can be significant environmental benefits associated with using compost at landfills. The study appears in Environmental Science & Technology.

"There are an increasing number of composting programs, and many of them are required to use the resulting compost 'beneficially,'" says James Levis, a civil, construction and environmental engineer at North Carolina State University. "A lot of state and local regulations don’t recognize 'alternative daily cover' as a beneficial use. But our work shows that using compost as alternative daily cover at landfills is competitive, and often superior, to the use of compost as a soil amendment in terms of its environmental benefits."

Landfills apply a layer of daily cover each day to reduce odors, reduce wind-blown debris and keep vermin out of the landfilled waste. Federal regulations currently require 6 inches of soil as a daily cover.

Meanwhile, while most of the nation’s yard waste is already turned into compost, a small and rapidly growing percentage of its food waste is also being composted.

Levis and his collaborators wanted to determine how environmentally beneficial it would be to use compost as alternative daily cover on landfills, and whether those benefits were comparable to the benefits of using compost to amend soil.

The researchers found that using compost as daily cover outperformed its use as a soil amendment in almost 100% of the simulations evaluated when it comes to eutrophication, or excess nutrients.

On the other hand, soil amendment was better at limiting abiotic resource depletion potential in 96% of the simulations and was better in terms of cumulative energy demand about 94% of the time, primarily due to the reduction of peat use.

"This research has the potential to enlarge the use of compost for environmental benefits," says Bruce Hamilton, a program director in NSF’s Directorate for Engineering.