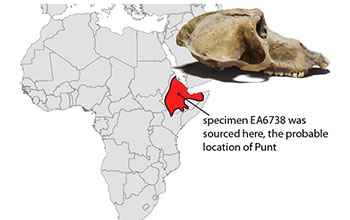 The fabled land of ancient Punt was a major trading partner of Egypt's for at least 1,100 years. Punt was an important source of luxury goods, including incense, gold, leopard skins and living baboons. Located somewhere in the southern Red Sea region in Africa or Arabia, scientists have debated its geographic location for more than 150 years.

A new study tracing the geographic origins of Egyptian mummified baboons finds that they came from an area that includes the modern-day countries of Ethiopia, Eritrea, Dijbouti, Somalia and Yemen, providing new insight into Punt's location.

The results, published in eLife, demonstrate the tremendous nautical range of early Egyptian seafarers. A Dartmouth College-led team of researchers, including primatologists, geographers and geochemists, worked with Egyptologist Salima Ikram of the American University in Cairo to analyze baboons discovered in ancient Egyptian temples and tombs, and modern baboons from across eastern Africa and southern Arabia.

"Long-distance seafaring between Egypt and Punt, two sovereign entities, was a major milestone in human history because it drove the evolution of maritime technology," says lead author Nathaniel Dominy of Dartmouth College. "Trade in exotic luxury goods, including baboons, was the engine behind early nautical innovations.

"Punt was central to the rise of early maritime commerce, so determining its location is important. Our analysis is the first to show how mummified baboons can be used to inform this enduring debate."

As the researchers explain in their U.S. National Science Foundation-funded study, the estimated location of Punt is still provisional, but future research may hold the key to mapping the historic origins of global trade networks.

"This work was the result of a collaboration among scientists at the American University in Cairo, the Lawrence Livermore Laboratory and the team at Dartmouth College," says Paul Filmer, a program director in NSF's Office of International Science and Engineering.