Drones over the Amazon

Scientists monitor the health of the world's largest rainforest 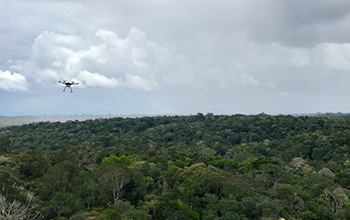 A drone flies toward a rainstorm in the Amazon.

By "smelling the forest," a Harvard-led team of researchers funded by the U.S. National Science Foundation is attempting to measure how and when that change could happen. The scientists report their results in the journal Environmental Science: Atmospheres.

As the planet warms, drought, wildfire and changing weather patterns threaten some 400 billion trees in the Amazon, some of which are already at risk from logging and mining. As trees are damaged or killed, they decompose and release carbon into the atmosphere.

The question is: How do we know when we're approaching that tipping point?

Martin, with an international team of researchers and collaborators from Amazonas State University and the Amazonas State Research Support Foundation, has developed an early detection system to monitor changes in the Amazon.

The research aims to better understand how the Amazon responds to stress. The team is mapping and monitoring the unique chemical signals emitted by trees known as volatile organic compounds, or VOCs.

Every species of plant emits a different VOC signature, like a fingerprint, which can change based on the season or stresses to the plant, for example, drought or floods.

"Forests can speak to us through VOCs," said Martin. "Translating these signals can lead to an understanding of how forest ecosystems respond to climate stress and climate change."

But there are major challenges to collecting data on VOCs. Airplanes can cover large distances but can't fly low enough to collect VOC samples, which reach heights of only a kilometer or less above the canopy. Towers can sense at the right height but only for the local ecosystem.

To bridge this canyon of data, the team is turning to drones.

"What makes drone-based sensors so exciting is that they offer the possibility of collecting data at unexplored scales," said Martin. "This could lead to revolutionary insights into Amazonian ecosystems under climate stress and anticipated changes in climate and biodiversity."

Added Sylvia Edgerton, a program director in NSF's Division of Atmospheric and Geospace Sciences, "Using an unmanned aerial vehicle to map concentrations of these compounds throughout the canopy is a novel approach for assessing how much of their concentration comes from biological processes in plants versus secondary production from atmospheric chemical reactions in the canopy."