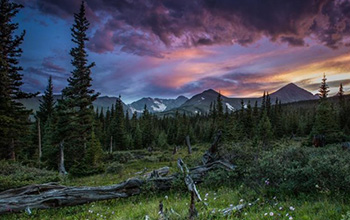 A long-term trend of ecological improvement is appearing in the mountains west of Boulder, Colorado. Researchers at the University of Colorado Boulder found that Niwot Ridge, a high alpine area of the Rocky Mountains east of the Continental Divide, is slowly recovering from increased acidity caused by vehicle emissions in Colorado's Front Range.

The results show a decrease in levels of nitric and sulfuric acid in the Green Lakes Valley region of Niwot Ridge over the past 30 years, especially since the mid-2000s.

The findings, which suggest that alpine regions across the Mountain West may be recovering, are published in the Journal of Geophysical Research: Biogeosciences.

That's good news for the wildlife and wildflowers of Rocky Mountain National Park to the north of Niwot Ridge, which depend on limited levels of acidity in water and soil to thrive, the scientists said. Colorado's Rocky Mountains are also a source of water for people in the Mountain West.

"By controlling vehicle emissions, some of the places that make Colorado unique are going back to what they used to be," said ecologist Jason Neff, a co-author of the paper.

Almost every area in the world, including Colorado's Rocky Mountains, has been affected in the past 200 years by increased acidic nutrients, such as nitrogen, in rain and snow.

The researchers analyzed data from 1984 to 2017 on atmospheric deposition and stream water chemistry. They found that around the early 2000s, levels of nitric and sulfuric acid stopped increasing in the Green Lakes Valley. In the mid-2000s, the levels started decreasing.

The findings were not all good news, however. Levels of ammonium from fertilizer have more than doubled in this area between 1984 and 2017, indicating a need to continue monitoring this agricultural chemical and its effects on the mountain ecosystem.

"We used water quality modeling and statistical approaches to analyze the long-term datasets researchers have been collecting for decades," said Eve-Lyn Hinckley, a co-author of the paper.

The study builds on decades of field work at Niwot Ridge by scientists at CU Boulder and beyond. Niwot Ridge is a Long-Term Ecological Research site funded by the U.S. National Science Foundation. Its 4 square miles stretch from the Continental Divide to the subalpine forest 25 miles northwest of Boulder.

"This project not only shows the value of long-term research, but confirms the environmental benefits of reducing air pollution, even in areas far removed from the pollution source," said Doug Levey, a program director in NSF's Division of Environmental Biology.