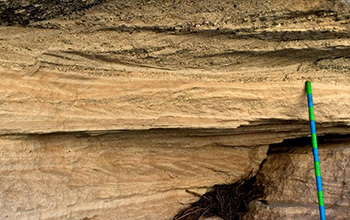 The herringbone pattern in these sands is the result of water movement in a past ocean tidal system.

A team led by University of Oregon geologist Rebecca Dorsey has published two papers that provide new insights into the origins of the Colorado River, using data from ancient sedimentary deposits located east of the San Andreas fault near the Salton Sea in Southern California.

The papers present evidence that the now-desert landscape of the river's lower valley was submerged roughly five million to six million years ago under shallow seas with strong, fluctuating tidal currents that flowed back and forth along the trajectory of the present-day river.

Layers of sedimentary rocks bearing marine fossils, burrows and sedimentary structures, the researchers concluded, record a dramatic rise in sea level. The rise drowned former alluvial fans and caused tidal waters to invade the valley prior to arrival of the Colorado River and its voluminous load of water and sediment.

The studies, funded by the U.S. National Science Foundation, were published in the journal Sedimentology.

The geologists describe a rich mixture of carbonate mudstones, plant debris and traces of ancient organisms that record brackish water conditions where seawater was diluted by a large influx of freshwater from high annual rainfall before the Colorado River flowed into the area.

The sediments, the researchers found, formed in wide tidal flats along an ancient, humid-climate marine shoreline.