Too much salt threatens ecosystem and human health 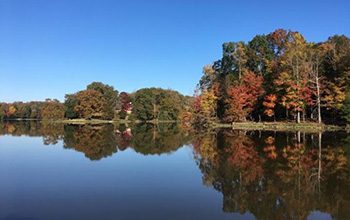 The Occoquan Reservoir supplies water to some two million people in Northern Virginia.

Doctors often tell us, "cut back on your salt." And just as too much dietary salt is bad for blood pressure, too much salt in our nation's streams, lakes, and reservoirs threatens ecosystem health and the security of our nation's drinking water and food supplies.

"Salt levels are rising fast in freshwater across the United States," said Stanley Grant, a civil and environmental engineer at Virginia Tech and the principal investigator on a U.S. National Science Foundation-funded project to look at new ways of addressing the problem. "It's a slow-moving train wreck. If we don't figure out how to reverse this trend soon, it could become one of our nation's top environmental challenges."

Culprits include excessive de-icer use on roads and parking lots during the winter as well as the discharge of industrial and municipal wastewater. But putting our nation on a salt diet will not be easy.

"Reversing freshwater salinization will require changing the way we design and operate our engineered infrastructure and changing the everyday choices we all make, from which home products we use, such as detergents, to how much salt to sprinkle on our icy driveways," said Sujay Kaushal of the University of Maryland, a co-principal investigator on the NSF grant.

Freshwater salinization is one of many upcoming environmental threats that won't be easily solved with traditional approaches, scientists say.

"We all contribute to the problem in some small way," said co-principal investigator Thomas Birkland of North Carolina State University. "It's a classic 'tragedy of the commons' problem. Through our collective actions, we unwittingly deplete the very resource we all rely on for survival."

Added Nora Savage, a program director in NSF's Directorate for Engineering, "Solving complex environmental challenges, such as increased salinity in fresh waters, cannot be achieved without the integration of multiple disciplines and stakeholders, as demonstrated in this project."