Genetic material packaged inside cells is more solid than liquid 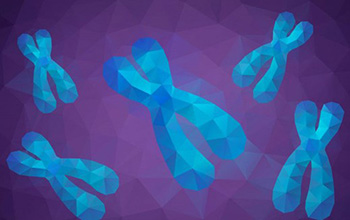 Scientists have discovered that chromatin in a cell is a solid, not a liquid

Biochemists have helped answer a fundamental question that has lingered since the discovery of DNA: Is chromatin -- the complex package of DNA and proteins in the nucleus of our cells -- a solid or a liquid?

In a U.S. National Science Foundation-funded study published in the journal Cell, a team co-led by Jeffrey Hansen, a Colorado State University biochemist and molecular biologist, found that chromatin behaves as a solid or gel rather than a liquid. Hansen's team collaborated with University of Alberta oncologist Michael Hendzel on the study.

Previously, scientists assumed that chromatin and other elements of the nucleus operated in a liquid state. The team's new insight into the physical properties of chromatin challenges that idea and could lead to a more accurate understanding of how the genome is encoded and decoded.

The human genome, or the complete set of genetic instructions, is structured into 23 pairs of chromosomes per cell. All our chromosomes are made from chromatin, which is half structural histone proteins and half DNA. The DNA is organized into long strings with beadlike structures called nucleosomes.

Inside the cell nucleus, chromatin fiber interacts with itself to condense into a chromosome. The chromatin fiber also supports gene expression and replication of chromosomal DNA. Although there is some understanding of the structures that make up a nucleus, how exactly those structures are organized, and the full extent of how the structures interact with each other, is not well known.

"Whether a substance is a solid or liquid is a fundamental property that dictates how that substance functions," Hansen said. "Our genomes are made out of condensed chromatin. Finding out that condensed chromatin is a solid will influence every aspect of how we think genomes store and express information, in both health and disease."

Added Karen Cone, a program director in NSF's Division of Molecular and Cellular Biosciences, "This discovery is an important step toward understanding how the physical properties of the genome influence its use as the instruction manual for life's building blocks."