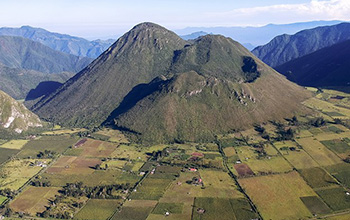 Scientists have created a tool that can improve estimating hazards of future volcanic eruptions.

A team of geoscientists has developed a new way to reconstruct the sizes of volcanic eruptions that occurred thousands of years ago, creating a first-of-its kind tool that can aid in understanding past explosive eruptions and improve estimates of hazards from future eruptions.

The advanced numerical model allows scientists to reconstruct eruption rates through time by estimating the dimensions of the umbrella clouds that contribute to the accumulation of deposits of volcanic ash. The research is published in the journal Communications Earth and Environment.

The U.S. National Science Foundation-funded study, which deciphered the 2,500-year-old eruption of a volcano in Ecuador, was led by University of South Florida scientist Robert Constantinescu in collaboration with colleagues Laura Connor, Chuck Connor, Sylvain Charbonnier, Alain Volentik and other members of an international team.

When large explosive eruptions occur, they form laterally, spreading umbrella clouds into the stratosphere and facilitating the transport over hundreds of miles of fine-grained ash that settles and covers large swaths of land.

Current technology allows scientists to observe ash clouds. But past eruptions are characterized based on the geological interpretation of their tephra deposits -- the pieces and fragments of rock ejected into the air by an erupting volcano. By estimating the erupted volume and mass, plume height, umbrella cloud dimensions and other characteristics, scientists can understand and characterize volcanic eruptions, improving the forecasting of future events.

The team's work shows that the dimensions of the umbrella clouds are the telling factors in reconstructing past large explosive eruptions.