Glimpse of a blazar in the early universe 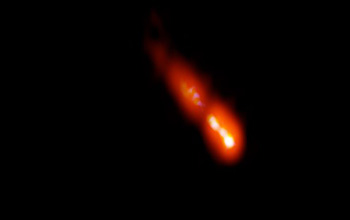 A blazar with its jet pointed toward Earth, the brightest radio-emitting blazar yet seen.

The supersharp radio "vision" of the U.S. National Science Foundation's Very Long Baseline Array has revealed previously unseen details in a jet of material ejected at three-quarters the speed of light from the core of a galaxy some 12.8 billion light-years from Earth.

The galaxy, dubbed PSO J0309+27, is a blazar, with its jet pointed toward Earth. A blazar is a feeding super-massive black hole in the heart of a distant galaxy that produces a high-energy jet viewed face-on from Earth. PSO J0309+27 is the brightest radio-emitting blazar yet seen at such a distance; it’s also the second-brightest X-ray emitting blazar at such a distance.

PSO J0309+27 is viewed as it was when the universe was less than a billion years old, or just over 7% of its current age.

In this image, the brightest radio emission comes from the galaxy's core, at bottom right. The jet is propelled by the gravitational energy of a supermassive black hole at the core and moves outward, toward the upper left. The jet seen here extends some 1,600 light-years and shows structure within it.

An international team of astronomers observed the galaxy in April and May of 2020. The researchers report their results in the journal Astronomy & Astrophysics.

"This research is important for understanding jets launched by feeding supermassive black holes," says Joseph Pesce, a program director in NSF's Division of Astronomical Sciences. "The observation allows for a more detailed assessment of differences between objects that are large distances from Earth (and in the early universe) and those relatively closer to Earth."

The National Radio Astronomy Observatory is a facility of the U.S. National Science Foundation, operated under cooperative agreement by Associated Universities, Inc.