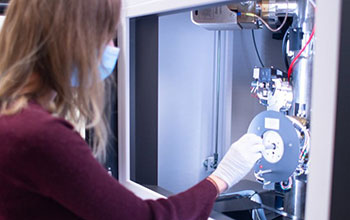 Desalination membranes remove salt and other chemicals from water.

Producing clean water at a lower cost could be on the horizon after researchers at the University of Texas at Austin and Penn State solved a complex problem that had baffled scientists for decades.

Desalination membranes remove salt and other chemicals from water, a process critical to the health of society, cleaning billions of gallons of water for agriculture, energy production and drinking. The idea seems simple -- push salty water through and clean water comes out the other side -- but the process contains complex intricacies that scientists are still trying to understand.

The research team, in partnership with DuPont Water Solutions, solved an important aspect of this mystery, opening the door to reduced costs in clean water production. The researchers determined that desalination membranes are inconsistent in density and mass distribution, and the inconsistency can hold back their performance. Uniform density at the nanoscale is the key to increasing how much clean water these membranes can create.

"Reverse osmosis membranes are widely used for cleaning water, but there's still a lot we don't know about them," said Manish Kumar, a civil, architectural and environmental engineer at UT Austin, who co-led the research. "We couldn't really say how water moves through them, so all the improvements over the past 40 years have essentially been done in the dark."

The findings were published in Science.

The paper documents an increase in efficiency in the membranes tested by 30%-40%, meaning they can clean more water while using significantly less energy. That could lead to increased access to clean water and lower water bills for individual homes and large users alike.

The team, which also includes researchers from Iowa State University, developed 3D reconstructions of a nanoscale membrane structure using state-of-the-art electron microscopes at the Materials Characterization Lab at Penn State. The scientists modeled the path water takes through these membranes to predict how efficiently water could be cleaned based on structure.

Researchers at the Texas Advanced Computing Center helped visualize these simulations, and most of the calculations were performed on the U.S. National Science Foundation-funded Stampede2, TACC's supercomputer.

"The NSF computational infrastructure offers a versatile platform that supports a broad range of research efforts with important outcomes, such as the essential work conducted by this public/private partnership to safeguard the nation's water supplies," said Manish Parashar, director of NSF's Office of Advanced Cyberinfrastructure.