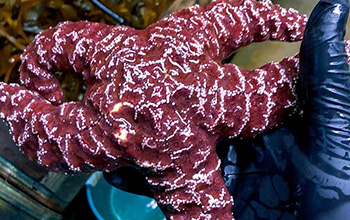 A healthy starfish is pictured. Sea stars along the Pacific Coast are not so fortunate.

For more than seven years, a mysterious wasting disease has nearly killed off sea star populations worldwide. Many of these species are at the brink of extinction.

New Cornell University-led research supported by the U.S. National Science Foundation suggests that starfish, victims of sea star wasting disease, may actually be in respiratory distress -- literally "drowning" in their environment. Increased microbial activity derived from nearby organic matter and warm ocean temperatures are robbing the animals of their ability to breathe.

"As humans, we breathe, we ventilate, we bring air into our lungs and we exhale," said Ian Hewson, a microbiologist at Cornell. "Sea stars diffuse oxygen over their outer surfaces through little structures called papulae, or skin gills. If there is not enough oxygen surrounding the papulae, the starfish can't breathe."

The research results, "Evidence That Microorganisms at the Animal-Water Interface Drive Sea Star Wasting Disease," were published in the journal Frontiers in Microbiology.

According to Hewson, ocean conditions led to the production of unusual amounts of organic material, which prompt bacteria to thrive. As bacteria consume the organic matter, they deplete the oxygen in the water -- creating a low-oxygen micro-environment that surrounds starfish and leads to deflation, discoloration, puffiness and limb twisting.

"It's a cascade of problems that starts with changes in the environment," Hewson said, explaining that most of the organic matter comes from microscopic algae discharges, zooplankton excretion and egestion and from decaying animal carcasses. That stimulates a group of bacteria called copiotrophs, which survive on carbon and rapidly consume organic matter.

While absorbing the organic matter, the copiotrophs deplete oxygen in the sea star's watery space.

Hewson said that, while more scientific work must be done, "This reframes the discussion about marine disease ecology, which has focused on pathogenic disease. We should now include microorganisms that don't directly cause the pathology, since they may hold a key to affecting sea star health."