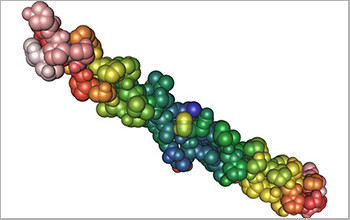 Biochemists have developed a synthetic collagen nanomaterial they can trigger to shape-shift.

Chemists have developed a nanomaterial they can trigger to shape-shift -- from flat sheets to tubes and back to sheets again -- in a controllable fashion. The Journal of the American Chemical Society published a description of the nanomaterial, which was developed at Emory University and holds the potential for a range of biomedical applications, from controlled-release drug delivery to tissue engineering.

The research is funded in part by the U.S. National Science Foundation.

The nanomaterial, which in sheet form is 10,000 times thinner than the width of a human hair, is made of synthetic collagen. Naturally occurring collagen is the most abundant protein in humans, making the new material intrinsically biocompatible.

"No one has previously made collagen with the shape-shifting properties of our nanomaterial," says Vincent Conticello, an Emory biomolecular chemist. "We can convert it from sheets to tubes and back simply by varying the pH, or acid concentration, in its environment."

Collagen is the main structural protein in the body's connective tissue, such as cartilage, bones, tendons, ligaments and skin. It is also abundant in blood vessels, the gut, muscles and other parts of the body.

Collagen taken from other mammals, such as pigs, is sometimes used for wound healing and other medical applications in humans. Conticello's team is one of only about a few dozen around the world focused on developing synthetic collagen suitable for applications in biomedicine and other complex technologies. Such synthetic "designer" biomaterials can be controlled in ways natural collagen cannot.

"As far back as 30 years ago, it became possible to control the sequence of collagen," Conticello says. "The field has really picked up steam, however, during the past 15 years due to advances in crystallography and electron microscopy, which allow us to better analyze structures at the nano-scale."