Unsure how to help insect declines? Scientists suggest some ways 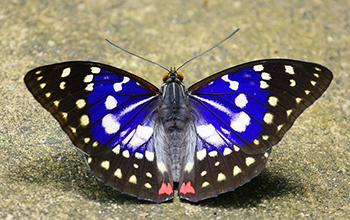 Entomologist Akito Kawahara's message is straightforward: We can't live without insects. They're in trouble. And there's something all of us can do to help.

Kawahara has witnessed the loss himself. As a child, he collected insects with his father every weekend, often traveling to a famous oak outside Tokyo whose dripping sap drew thousands of bugs.

It was there he first saw the national butterfly of Japan, the great purple emperor, Sasakia charonda. When he returned to the site a few years ago, the oak had been replaced by a housing development. S. charonda numbers are in steep decline nationwide.

While scientists differ on the severity of the problem, many findings point to a general downward trend for insects. In response, Kawahara has turned his attention to boosting appreciation for some of the world's most misunderstood animals.

"Insects provide so much to humankind," said Kawahara, a curator at the Florida Museum of Natural History. "In the U.S. alone, wild insects contribute an estimated $70 billion to the economy every year through free services such as pollination and waste disposal. That's incredible, and most people have no idea."

Insects sustain flowering plants, the linchpins of most land-based ecosystems, and provide food sources for birds, bats, freshwater fish and other animals. But they face a barrage of threats, including habitat loss, pesticides, pollution, invasive species and climate change. If human activities are driving the decline, Kawahara reasons, then people can also be a part of the solution.

In the journal Proceedings of the National Academy of Sciences, Kawahara and his collaborators outline easy ways everyone can contribute to insect conservation, including mowing less, dimming the lights, using insect-friendly soaps and sealants, and becoming insect ambassadors.