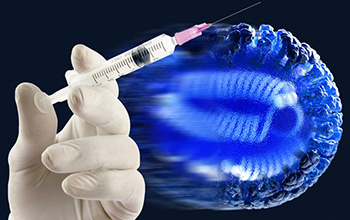 A new model analyzes how viruses escape the immune system.

One reason it's so difficult to produce effective vaccines against some viruses, including influenza and HIV, is that these viruses mutate very rapidly. Mutation allows them to evade the antibodies generated by a particular vaccine, through a process known as "viral escape."

MIT researchers have now devised a new way to computationally look at viral escape, based on models that were originally developed to analyze language. Their model can predict which sections of viral surface proteins are more likely to mutate in a way that enables viral escape, and can also identify sections that are less likely to mutate, making them good targets for new vaccines.

In a study appearing in Science, Berger and her colleagues identified possible targets for vaccines against influenza, HIV and SARS-CoV-2.

The MIT team decided to use a type of computational model known as a language model, taken from the field of natural language processing. These models were originally designed to analyze patterns in language, specifically, the frequency which with certain words occur together.

In the researchers’ studies of HIV, they found that the V1-V2 hypervariable region of the protein has many possible escape mutations, which is consistent with previous findings, and also found sequences that would have a lower probability of escape.

The scientists are now using their model to identify possible targets for cancer vaccines that stimulate the body's own immune system to destroy tumors. They say it could also be used to design small-molecule drugs that might be less likely to provoke resistance in diseases such as tuberculosis.

The work was partially funded by a U.S. National Science Foundation Graduate Research Fellowship. "We were delighted to see that Ellen Zhong, who is supported by an NSF Graduate Research Fellowship, was a key contributor to this important and timely research that should allow the development of more effective vaccines," says Kim Barrett, director of NSF's Division of Graduate Education.