When the Laki volcano erupted in 1783, its effects rippled around the world 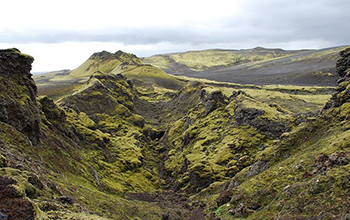 The central fissure of the Laki volcano in Iceland.

By reading between the lines of tree rings, U.S. National Science Foundation-funded researchers at the University of Arizona reconstructed what happened in Alaska the year the Laki Volcano erupted half a world away in Iceland. What they learned can help fine-tune future climate predictions.

In June, 1783, Laki spewed more sulfur into the atmosphere than any other Northern Hemisphere eruption in the last 1,000 years. The Inuit in North America tell stories about the year summer never arrived. Benjamin Franklin, who was in France at the time, noted the "fog" that descended over much of Europe in the aftermath, and correctly reasoned that it led to an unusually cold winter on the continent.

Previous analyses of annual tree rings have shown that the entire 1783 growing season for the spruce trees in Alaska was colder than average. But Julie Edwards, a researcher at UArizona, reasoned that since Laki erupted in June, it doesn't make sense to assume that the entire growing season, which starts in May for the trees, was cooler than normal.

Edwards is lead author of a paper published in the Journal of Geophysical Research that outlines how she and her collaborators, using an alternative method called quantitative wood analysis, painted a different picture of Alaskan climate that year.

What happened to climate half a world away from the eruption reflects a combination of forces -- what the volcano did and natural variability in climate. To understand how volcanoes affect the climate system, the team looked closely at the structure of tree rings to reveal what happened on a finer time scale.

"That suggests a sudden cooling at the end of the growing season, which is a different result than what you'd get by just looking at annual tree-ring width or wood density," said paper co-author Kevin Anchukaitis. "Using this fine-scale analysis, this week-to-week perspective from individual cells, it is possible to explain the previous observation that the entire summer of 1783 was cold in Alaska, and get a better perspective on a truly extreme climate event."