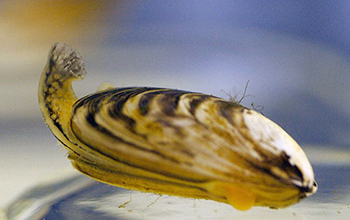 Quagga mussels have spread across four of the five Great Lakes.

The health of aquatic ecosystems depends on the supply of key nutrients, especially phosphorus. Too much phosphorus results in unwanted eutrophication, an over-enrichment of nutrients, and much effort is spent on preventing phosphorus pollution of water bodies.

In the world's largest freshwater ecosystem, the North American Great Lakes, this control may have been lost to an invasive species.

According to a U.S. National Science Foundation-funded study published in the journal PNAS, quagga mussels, which have spread across four of the five Great Lakes, have accumulated large amounts of phosphorus, to the degree that they now regulate the supply of phosphorus in the ecosystem.

Researchers at the Large Lakes Observatory at the University of Minnesota Duluth analyzed the cycling of phosphorus in the four Great Lakes in which the mussels have spread: Michigan, Huron, Erie and Ontario. They used a mass-balance model, which they calibrated with measurements the team performed on sediments and mussels at multiple locations in Lakes Michigan and Huron. The results show that the concentrations of phosphorus in the invaded Great Lakes are now regulated by the population dynamics of a single species: the quagga mussel.

"Quagga mussels are small, hard-shelled organisms that live on the lake floor and filter the water, removing phytoplankton and other small particles," explains Ted Ozersky, a scientist who co-led the study. The mussels occupy the lake bottoms at densities often exceeding 10,000 mussels per square meter (six mussels per square inch).

By filtering organic particles from lake water and returning phosphorus with their excretions, mussels dramatically alter the natural rates at which phosphorus is exchanged between lake water and sediments. According to the study, the mussels in Lake Michigan are not only removing phosphorus from the water 10 times faster than two decades ago, but are also resupplying the water column with eight times the amount of phosphorus. That "internal loading" effectively decouples the dynamics of phosphorus from watershed inputs, leaving the system open to poorly predictable fluctuations when mussel populations increase or decrease.

The results of the study show that a single invasive species can have dramatic consequences for geochemical cycles even in the world's largest aquatic ecosystems. According to the authors, this forewarns of similar ecological changes in mussel-invaded lakes across Europe and North America and calls for a new paradigm for managing aquatic ecosystems.