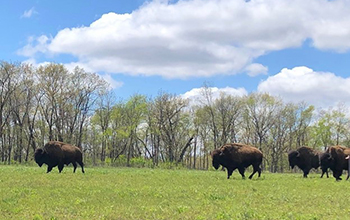 To restore habitat, management strategies proved stronger than the effects of plant biodiversity.

If you build it, they might not come. That's the key finding of a new study on habitat restoration practices that challenges a commonly accepted principle in ecology.

While the scientists did find some positive connections between plant and animal biodiversity, the gains weren't nearly as strong as benefits derived from implementation of restoration management strategies.

"We found that the effects of management strategies like controlled burns and bison reintroduction on animal communities were six times stronger on average than the effects of plant biodiversity," Guiden said.

"The most important effects of restoration on animal biodiversity had little to do with plant community biodiversity," he added. "Management practices focused on restoring plants might be insufficient to also restore animals."

The study is published in the Proceedings of the National Academy of Sciences.

The results were a surprise to the co-authors, who had predicted that plant biodiversity would have stronger effects on animal biodiversity than management strategies.

"Through their modeling approach, these researchers were better able to understand the factors that lead to shifts in animal diversity, potentially informing how restoration practitioners implement treatments in the field," said Betsy von Holle, a program director in NSF's Division of Environmental Biology.