Engineers and oncologists teamed to develop a microfluidic chip 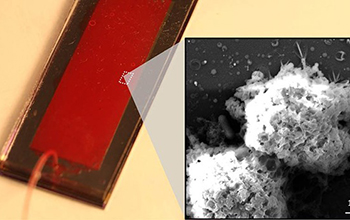 Natural killer immune cells are surrounded by smaller exosomes on a microfluidic chip.

Building on the promise of emerging therapies to deploy the body's "natural killer" immune cells to fight cancer, researchers at the University of Michigan have gone one step farther.

They've developed what is believed to be the first systemic way to catch natural killer cells and get them to release cancer-killing packets called exosomes. These nano-scale exosomes are thousands of times smaller than natural killer cells -- or NK cells for short -- and thus better able to penetrate cancer cells' defenses.

A proof-of-concept study in blood samples from five patients with non-small-cell lung cancer demonstrated that the approach was able to capture NK cells on a microfluidic chip and use them to "farm" the NK exosomes.

The U.S. National Science Foundation-funded team, which included engineers and oncologists, further demonstrated that the exosomes could effectively kill circulating tumor cells in cultures, according to findings published in Advanced Science.

"Exosomes are small sacs of proteins and other molecules that are naturally released by almost every type of cell in the body," says Yoon-Tae Kang, a chemical engineer and co-lead author of the study. "In this case, we wanted to expand our understanding of NK exosomes and try to harness their cancer-killing potential."

Compared to NK cells, NK exosomes are more stable and easier to modify for therapeutic purposes, Kang says. The system also has potential to help diagnose and monitor cancer, the study notes.

Harnessing the power of NK cells has long presented a tantalizing possibility for researchers. Unlike T cells, NK cells don't have to be primed by invader-specific antigens to fight off intruders.

"One major bottleneck of NK cell-based therapies, however, is that after the injection of the NK cells into patients, they're not good at infiltrating into the tumor microenvironment," says co-lead author Zeqi Niu, a chemical engineer. "The NK cell-derived exosomes contain the same cancer-killing molecules but they're much, much smaller and better able to penetrate into the tumors."