It all comes down to soil chemistry 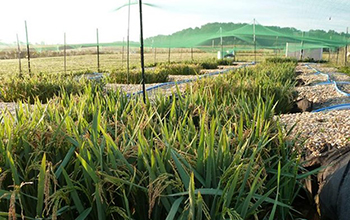 When most people hear "food contamination," they think of bacteria on unwashed fruits or vegetables or undercooked meat. However, there are other ways for harmful contaminants to get into food products.

Angelia Seyfferth, a member of the Soil Science Society of America, investigates food contamination coming from the soil where the plants grow. "It all comes down to the chemistry of the soil," says Seyfferth.

Seyfferth has been studying rice. The elements arsenic and cadmium can be present in the paddies where rice is grown, she found. She presented her research at the virtual 2020 ASA-CSSA-SSSA Annual Meeting. The study is funded by the U.S. National Science Foundation.

Elements such as arsenic and cadmium can be present in different chemical forms depending on their environment. Contaminants are taken up by plants when their chemical form in the soil resembles a nutrient the plant needs.

"Contaminants taken up by crop plants are routes of dietary exposure that are understudied," Seyfferth says. "But we can help decrease human exposure to toxins by applying our knowledge of soil chemistry."

Small amounts of arsenic and cadmium are present in soils around the globe and can be detected in many food products. It's the concentration in the vegetable or fruit, the chemical form of the element, and the amount someone eats that determines whether an individual experiences a negative health effect.

High concentrations of arsenic and cadmium are harmful to the body, and consuming low doses over a long period of time can cause cancer.

"Rice and rice-based foods are among the largest food sources of inorganic arsenic to humans," says Karl Rockne, a program director in NSF's Directorate for Engineering. "Understanding the exact mechanisms of how these contaminants are taken up by plants is key to developing approaches to prevent uptake. This research addresses an important and less-studied aspect of the problem."

Adds Seyfferth, "How food is grown affects not only the concentration of contaminants, but also where the contaminants are stored in the food. If we understand the chemical forms of contaminants in soil, we can design solutions to decrease plant uptake."