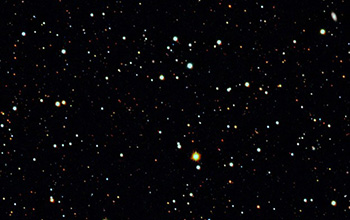 Astronomers have detected an extended dark matter halo around an ancient dwarf galaxy.

The Milky Way is surrounded by dozens of dwarf galaxies thought to be relics of the first galaxies in the universe. Among the most primitive of these galactic fossils is Tucana II -- an ultrafaint dwarf galaxy that is about 50 kiloparsecs, or 163,000 light years, from Earth.

Now astrophysicists at the Massachusetts Institute of Technology have detected stars at the edge of Tucana II, in a configuration that is surprisingly far from its center but is caught up in the tiny galaxy's gravitational pull. This is the first evidence that Tucana II hosts an extended dark matter halo -- a region of gravitationally bound matter the researchers calculated to be three to five times more massive than scientists had estimated.

The U.S. National Science Foundation-funded discovery of far-flung stars in an ancient dwarf galaxy implies that the very first galaxies in the universe were likely extended and more massive than previously thought.

"Tucana II has a lot more mass than we thought, to bound these stars that are so far away," says Anirudh Chiti. "This means that other relic first galaxies probably have these kinds of extended halos, too."

The researchers also determined that the stars on the outskirts of Tucana II are more primitive than the stars at the galaxy's core. This is the first evidence of such a stellar imbalance in an ultrafaint dwarf galaxy.

"An international team of scientists has pooled its resources to observe a dwarf galaxy in exquisite detail, which furthers our understanding of how the first galaxies formed," says Sarah Higdon, a program director in NSF's Division of Astronomical Sciences.

The unique configuration of the stars suggests that the ancient galaxy may have been the product of one of the first mergers in the universe, between two infant galaxies -- one slightly less primitive than the other.

"We may be seeing the first signature of galactic cannibalism," says MIT's Anna Frebel. "A galaxy may have eaten one of its slightly smaller, more primitive neighbors, that then spilled all its stars into the outskirts."

Frebel, Chiti and their colleagues published their results in Nature Astronomy.