Discovery of new lineage, insights into when and how fast mammoths adapted to cold climate 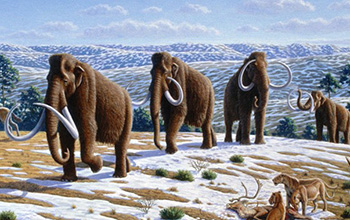 The mammoth that inhabited North America during the last ice age was a hybrid animal.

An international research team has sequenced DNA recovered from mammoth remains that are up to 1.2 million years old.  The results are published in the journal Nature.

The analyses, funded in part by the U.S. National Science Foundation, show that the Columbian mammoth that inhabited North America during the last ice age was a hybrid between the woolly mammoth and a previously unknown genetic lineage of mammoth. The study also provides new insights into when and how fast mammoths became adapted to cold climate.

The samples are a thousand times older than Viking remains and pre-date the existence of humans and Neanderthals, say the scientists.

Around one million years ago, there were no woolly nor Columbian mammoths, as they had not yet evolved.  Researchers have now managed to analyze the genomes from ancient mammoths using DNA recovered from mammoth teeth that had been buried for 0.7-1.2 million years in the Siberian permafrost.

Analyses of the genomes showed that the oldest specimen, which was approximately 1.2 million years old, belonged to a previously unknown genetic lineage of mammoth.

"It's amazing to see, and help support, advances in science and discovery such as where, when, and how iconic mammoths diverged across our ancient snowy planet," says Leslie Rissler, a program director in NSF's Division of Environmental Biology.