Sea ice is like a closed window for the ocean 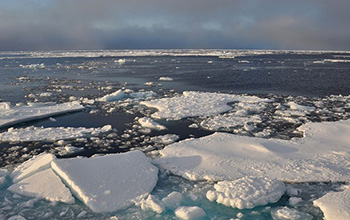 Extensive sea ice covered the world's oceans during the last ice age, preventing oxygen from penetrating into deep ocean waters and complicating the relationship between oxygen and carbon, a new study has found.

"Sea ice is effectively a closed window for the ocean," said Andreas Schmittner, a climate scientist at Oregon State University and co-author of the paper. "The closed window keeps fresh air out; the sea ice acted as a barrier to keep oxygen from entering the ocean, like stale air in a room full of people. If you open the window, oxygen from outside can come in and the air is not as stale."

The findings of the U.S. National Science Foundation-funded research, published recently in Nature Geoscience, challenge previous assumptions about the relationship between oxygen and carbon dioxide in deep ocean waters. Understanding this relationship gives researchers important insights into how the world's oceans may respond to climate change, said Schmittner.

The ocean plays an important role in the carbon cycle. Carbon dioxide from the atmosphere dissolves in surface waters, where algae turn the carbon into organic matter. Respiration of that organic matter removes oxygen as carbon sinks to the deep ocean. The process of transferring carbon from the surface of the ocean to the deep is known as the biological pump.

In the new work, Schmittner and his colleagues used modeling to investigate the lower oxygen levels in the deep ocean.

Deep ocean oxygen concentrations were reduced because surface waters were less equilibrated with the atmosphere. The disequilibrium was a result of the vast sea ice, mainly over the Southern Ocean, as well as higher iron fertilization from the ice age atmosphere, which was dustier, Schmittner said.

"Computer models like those in this study are essential tools for oceanographers exploring these processes, and for interpreting the record of past changes in ocean chemistry," said Hedy Edmonds, a program director in NSF's Division of Ocean Sciences.