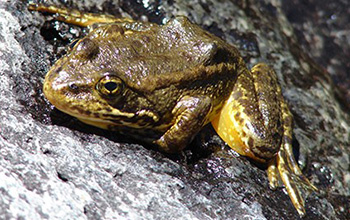 Beneficial microbes in the human gut can be affected by various disturbances. The same is true of the microbiomes of other animals.

In a study published in the ISME Journal, Andrea Jani, a researcher at the University of Hawai‘i at Mānoa, determined that the skin microbiome of an endangered frog was altered when the frog was infected by a specific fungus -- and didn't recover to its initial state even when it was cured of the infection.

All animals host symbiotic microbes -- many of which are beneficial -- in and on their bodies. For optimal health, this microbial community needs to remain fairly stable by resisting change or by recovering after a disruption. Some infectious diseases disrupt the microbiome, but very little is known about what happens after the host is cleared of infection.

Batrachochytrium dendrobatidis (Bd) is a fungus that infects the skin of amphibians. Since its discovery two decades ago, Bd has emerged as a global threat to amphibians.

With U.S. National Science Foundation funding, Jani led a team of researchers from the San Francisco Zoological Society, Sequoia and Kings Canyon National Parks, the U.S. Department of Agriculture Forest Service and the University of California to study the skin microbiome of the mountain yellow-legged frog (Rana muscosa), an endangered species in the Sierra Nevada in California.

Scientists have tested immunization as a method to protect the frogs. Frogs were taken into captivity, deliberately infected with the pathogen and then cleared of their infections using antifungal drugs in an attempt to train their immune systems to recognize and fight the pathogen. The frogs were then released back to the wild.

The team sampled the skin microbiomes of the frogs before they were exposed to the pathogen, after they were infected, and again after they had been cleared of infection. The researchers then used genetic sequencing to identify the bacteria present.

"We found that Bd infection disturbed the frog microbiome by altering the relative abundances of core bacterial species, just as we had observed in previous research," said Jani. "But surprisingly, when the frogs cleared their infections, their microbiomes did not recover. Removing the cause of the microbiome disturbance was not enough to bring about recovery from the disturbance."