Microbes deep beneath seafloor survive on byproducts of radioactive process

Results have implications for life on Mars 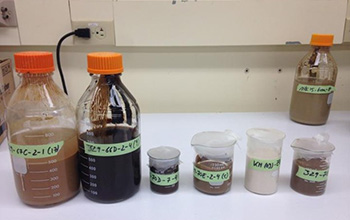 Microbes in sediment below the seafloor are sustained primarily by chemicals created by the natural irradiation of water molecules, report U.S. National Science Foundation-funded researchers at the University of Rhode Island and their collaborators.

The team discovered that the creation of these chemicals is amplified by minerals in marine sediment. In contrast to the view that life in sediment is fueled by products of photosynthesis, an ecosystem fueled by irradiation of water begins just meters below the seafloor in much of the open ocean. This radiation-fueled world is one of Earth's largest habitats.

The results are published in the journal Nature Communications.

"This work provides an important new perspective on the availability of resources that subsurface microbial communities can use to sustain themselves," said Justine Sauvage, the study's lead author. "It is fundamental to understanding life on Earth and the habitability of other planetary bodies, such as Mars."

The process driving the finding is radiolysis of water -- the splitting of water molecules into hydrogen and oxidants from being exposed to naturally occurring radiation. Steven D'Hondt, a University of Rhode Island oceanographer and co-author of the study, said the resulting molecules become the primary source of food and energy for microbes living in the sediment.

Why the process is amplified in wet sediment is unclear, but D'Hondt speculates that minerals in the sediment may "behave like semiconductors, making the process more efficient."

The discoveries resulted from a series of experiments at the Rhode Island Nuclear Science Center. The scientists irradiated vials of wet sediment retrieved from locations in the Pacific and Atlantic Oceans collected by researchers aboard International Ocean Discovery Program and other vessels. They compared the production of hydrogen with similarly irradiated vials of seawater and distilled water. The sediment amplified the results by as much as a factor of 30.