How did dogs get to the Americas? 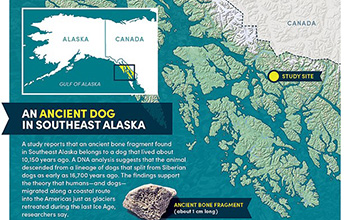 How did dogs get to the Americas? An ancient bone fragment holds clues.

The history of dogs has been intertwined, since ancient times, with that of the humans who domesticated them. But how far back does that history go in the Americas and which route did dogs use to enter that part of the world?

A U.S. National Science Foundation-funded study led by researchers at the University at Buffalo provides insight into these questions. The results show that a bone fragment found in Southeast Alaska belongs to a dog that lived in the region about 10,150 years ago. Scientists say the bone -- a piece of a femur -- represents the oldest confirmed remains of a domestic dog in the Americas.

Researchers analyzed the dog's mitochondrial genome and concluded that the animal belonged to a lineage of dogs whose evolutionary history diverged from that of Siberian dogs as early as 16,700 years ago. The timing of that split coincides with a period when humans may have been migrating into North America along a coastal route that included Southeast Alaska. The research is published in Proceedings of the Royal Society B.

Charlotte Lindqvist is the senior author of the study, which included scientists from the University at Buffalo and the University of South Dakota. The findings add to a growing body of knowledge about the migration of dogs into the Americas.

Lindqvist's team did not set out to study dogs. The scientists came across a femur fragment while sequencing DNA from a collection of hundreds of bones excavated years before in Southeast Alaska. The bone fragment, originally thought to be from a bear, was small, but when the DNA was studied, the team realized it was from a dog, Lindqvist says.