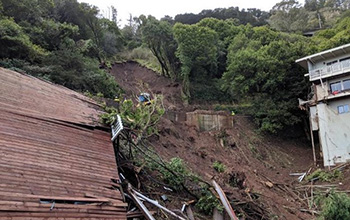 A landslide turned into a debris flow that swept away a house in Sausalito, California.

The threat of landslides is in the news as torrential winter storms in California threaten to undermine fire-scarred hillsides and bring deadly debris flows crashing into homes and inundating roads.

But it doesn't take winter storms and wildfires to reveal the landslide danger, University of California, Berkeley researchers say. Aerial surveys using airborne laser mapping -- LiDAR (light detection and ranging) -- can provide detailed information on the topography and vegetation that allow scientists to identify which landslide-prone areas could give way during an expected rainstorm.

That information is especially important for predicting where shallow landslides -- those involving the soil mantle -- may mobilize and transform as they travel downslope into destructive debris flows.

The catch, the scientists say, is that such information cannot yet help predict how large and potentially hazardous the landslides will be, so evacuations may target more people than are actually endangered by big slides and debris flows.

In a U.S. National Science Foundation-funded paper in the journal Proceedings of the National Academy of Sciences, UC Berkeley geologist William Dietrich and colleagues report tagging landslide-prone areas according to their likely size and hazard potential, in hopes of more precise predictions.

Their model takes into account the physical aspects of hillsides -- steepness, root structures holding the slope in place and soil composition -- and the pathways water follows as it runs downslope and into the soil.

But key unknowns are the characteristics of subsurface soil and underlying bedrock and the influence of past landslides on ground conditions.

The scientists urge more intensive research on steep hillsides to predict these subsurface features. That could include more drilling, installing hydrologic monitoring equipment and applying other geophysical tools that can be used to map failure-susceptible soil.

"As more people populate steeper terrain and modify the landscape in the process, it is increasingly important to identify the characteristics that could trigger landslides and other, less catastrophic, Earth movements," says Richard Yuretich, a program director in NSF's Division of Earth Sciences.