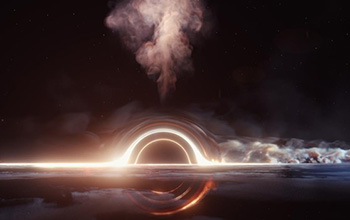 This black hole bends spacetime, allowing the far side of its accretion disc to be seen.

A team of scientists has detected the presence of a high-energy neutrino -- a particularly elusive particle -- in the wake of a star's destruction as it is consumed by a black hole.

The discovery is a result of U.S. National Science Foundation-funded research and is reported in the journal Nature Astronomy. It sheds new light on the origins of Ultrahigh Energy Cosmic Rays -- the highest-energy particles in the universe. The work, which involved researchers from more than two dozen institutions, including New York University, focused on neutrinos -- subatomic particles that are produced on Earth only in powerful accelerators.

Neutrinos, and the process of their creation, are hard to detect, making their discovery, along with that of Ultrahigh Energy Cosmic Rays, noteworthy. "The origin of cosmic high-energy neutrinos is unknown, primarily because they are notoriously hard to pin down," said Sjoert van Velzen, one of the paper's lead authors. "This result would be only the second time high-energy neutrinos have been traced back to their source."

Previously, the NSF-supported IceCube Neutrino Observatory located at the South Pole reported the detection of a neutrino, whose path was later traced by the Zwicky Transient Facility at Caltech's Palomar Observatory. Its measurements showed a spatial coincidence of a high-energy neutrino and light emitted after a star was consumed by a black hole.

Added Hans Krimm, a program director in NSF's Division of Astronomical Sciences, "This result is an outstanding example of how combining observations across the electromagnetic spectrum can add to our understanding of physics in the vicinity of a super-massive black hole."