Population of critically endangered Bahama Oriole is much larger than thought 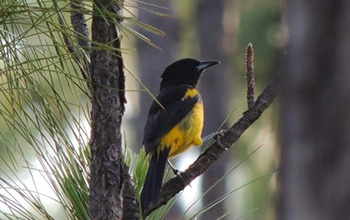 This Bahama Oriole is perched in a pine tree on Andros Island in the Bahamas.

On a low-lying island in the Caribbean, the future of the critically endangered Bahama Oriole just got a shade brighter.

A U.S. National Science Foundation-funded study led by researchers at the University of Maryland, Baltimore County estimates the population of these striking black and yellow birds at somewhere between 1,300 and 2,800 individuals in the surveyed region, suggesting that the overall population is likely several thousand.

Older studies estimated the entire population at fewer than 300, so the new results indicate there are at least 10 times as many Bahama Orioles as previously understood. The research appeared in Avian Conservation and Ecology.

The result "is a step forward for conservation," says Michael Rowley, one of two co-lead authors of the study. "This makes the world a bit more informed about what we should be putting our efforts toward. There are other birds that could use attention as well."

In addition to potentially freeing up resources to protect other threatened birds in the Caribbean, details of the study revealed new avenues for protecting the still-endangered Bahama Oriole.

Earlier work had largely discounted the pine forest, which covers approximately 20% of the island, as important habitat for the Bahama Oriole and focused instead on human-dominated habitats such as villages and agricultural lands. In this study, the scientists found that the birds prefer pine forest containing thatch palms.

"This is a good example of exciting outcomes from NSF's International Research Experience for Students program," says Maija Kukla, a program director in NSF's Office of International Science and Engineering. "UMBC students conducted research with scientists at the Bahamas National Trust to explore an ecosystem in the Caribbean, a biodiversity hotspot that is acutely threatened by climate variations."