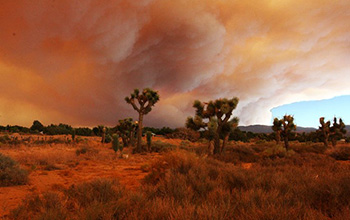 As the frequency and size of wildfires continue to increase worldwide, new research by Carnegie Mellon University scientists shows that the chemical aging of the particles emitted by these fires can lead to more extensive cloud formation and intense storm development in the atmosphere. The U.S. National Science Foundation-funded research was published in Science Advances.

"The introduction of large amounts of ice-nucleating particles from these fires can cause substantial impacts on the microphysics of clouds, whether supercooled cloud droplets freeze or remain liquid, and the propensity of the clouds to precipitate," said Ryan Sullivan of Carnegie Mellon. Understanding these impacts is a key to accurately modeling Earth's climate and how it could continue to change.

Building on research by Sullivan's team in Carnegie Mellon's Center for Atmospheric Particle Studies, the scientists collected plant materials, burned them and analyzed the particles emitted in the smoke. In particular, the team was interested in ice-nucleating particles that can catalyze ice crystal formation at higher than usual temperatures and affect cloud formation. In fact, most precipitation over land starts from ice-containing clouds.

While it was widely known that particles freshly emitted by the burning of biomass -- such as tall grasses, shrubs and trees -- can impact ice nucleation, Sullivan's team was interested in finding out the effects of these particles as they traveled for days and weeks in the atmosphere and experienced chemical aging.

With a specialized chamber reactor, mass spectrometers, electron microscopy, and an innovative microfluidic droplet freezing technique, the researchers analyzed the particles emitted by the burning of various types of plant material as happens in wildfires and prescribed burns. The scientists simulated the aging processes these particles would undergo in the atmosphere. They found that chemical aging of particles emitted by wildfires can indeed lead to more extensive cloud formation.