Model shows where hatchlings likely travel in the open sea 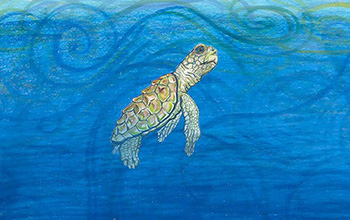 A detailed global ocean model simulation by scientists at the National Center for Atmospheric Research and other institutions has given scientists insights into where baby sea turtles may go in their "lost years" -- the time after they scramble off sandy beaches where they are born and swim into the open ocean.

The look at an important period in the life cycle of endangered loggerhead turtles could help inform more comprehensive conservation efforts that encompass regions of the open ocean where young turtles grow, not just their nesting beaches. It also pinpoints regions of the ocean that are important to better know how to protect sea turtles.

"To understand where sea turtle hatchlings are being swept when they enter the open ocean -- and how favorable that habitat is to turtle survival -- we need to simulate smaller scale ocean features, the jets and eddies that transport these younglings," said Cheryl Harrison, a researcher at the University of Texas Rio Grande Valley who led the study. "The models typically used to simulate global ocean movement are too coarse for us to resolve these important features. The exciting thing about this study is that we were able to use a high-resolution, eddy-resolving model to track where the turtles are traveling."

The U.S. National Science Foundation-funded ocean simulation, published in the Journal of the Royal Society Interface, was run using the National Center for Atmospheric Research-based Community Earth System Model at a resolution that's an order of magnitude higher than standard global modeling runs. The model also contains complex biogeochemistry, which allowed the researchers to estimate food availability along the turtles' path.