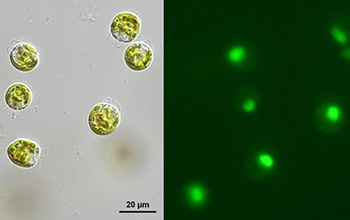 New U.S. National Science Foundation-funded research suggests that the ability of green algae to eat bacteria is more widespread than previously thought, a finding that could be important in environmental and climate science.

The work, led by scientists at the American Museum of Natural History, Columbia University and the University of Arizona, found that five strains of single-celled green algae consume bacteria when they are "hungry" and only when the bacteria are alive. The results are published in The ISME Journal.

"Traditionally, we think of green algae as being purely photosynthetic organisms, producing their food by soaking in sunlight," said Eunsoo Kim at the American Museum of Natural History, one of the study's corresponding authors. "But we've come to understand that there are a number of species of green algae that also can eat bacteria when the conditions are right. And we've found out how finicky they are as eaters."

The researchers conducted feeding experiments with live bacteria that were labeled with a non-toxic fluorescent dye, and they combined the bacteria with five different strains of unicellular green algae for analyses through a flow cytometer, which helps scientists analyze cell properties in solution.

The flow cytometer measured increasing levels of green fluorescence in the algal cells over time, suggesting that the algae were consuming the bacteria. To confirm that ingestion was occurring, the researchers used high-precision microscopy.

In the process, the team discovered two quirks about the finicky eaters: The algal strains they tested ate only live bacteria (dead bacteria were left untouched), and they ate more when the levels of other nutrients were low. These findings have implications for the study of green algae, the scientists said.

Added Michael Sieracki, a program director in NSF's Division of Ocean Sciences, "The evidence that most phytoplankton in the ocean may also eat other cells is growing rapidly. This may be the norm, rather than the exception."