How fast is the universe expanding? Galaxies provide one answer 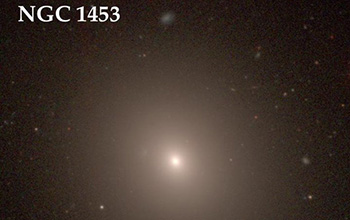 NGC 1453 a galaxy in the constellation Eridanus, was used to calculate the universe's expansion rate

Determining how rapidly the universe is expanding is key to understanding our cosmic fate, but along with more precise data comes a conundrum. Estimates based on measurements in our current universe don't agree with extrapolations from shortly after the Big Bang some 13.8 billion years ago.

A new U.S. National Science Foundation-funded estimate of the local expansion rate -- the Hubble constant -- reinforces that discrepancy. The Hubble constant is a unit that describes how fast the universe is expanding at different distances from a particular point in space.

For the new estimate, astronomers at the University of California, Berkeley and their colleagues measured fluctuations in the surface brightness of 63 giant elliptical galaxies to determine their distance, and plotted distance against velocity to obtain the Hubble constant.

The surface brightness fluctuation technique may provide more precise distance estimates than other methods, although the 63 galaxies are at distances that look back in time a fraction of the age of the universe.

The data on these galaxies were assembled and analyzed by John Blakeslee, an astronomer at the National Science Foundation's NOIRLab. He is first author of a paper now accepted for publication in The Astrophysical Journal.

"Brightness fluctuations are a way of measuring the distance to these giant elliptical galaxies," says Sarah Higdon, a program director in NSF's Division of Astronomical Sciences. "The technique is like having a braille map that represents surface brightness and using your fingertips to 'feel the bumps.'  Elliptical galaxies with a 'rough texture' are closer to Earth, and those that are 'smoother' are farther away."