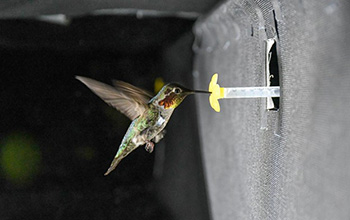 An Anna's hummingbird flying in an experimental setup, drinking sugar water from a fake flower.

The hummingbird is named after the sound it makes when it hovers in front of a flower to feed. But only now has it become clear how it generates its namesake sound. The results are published in eLife.

U.S. National Science Foundation-funded researchers at Stanford University and their international colleagues at Eindhoven University of Technology and Sorama observed hummingbirds using 12 high-speed cameras, 6 pressure plates and 2,176 microphones. They discovered that the soft and complex feathered wings of hummingbirds generate sound in a fashion like the simpler wings of insects. The new insights could help make devices such as fans and drones quieter.

The scientists succeeded in measuring the origin of the sound generated by the flapping wings of a flying animal for the first time. The hummingbird's hum originates from the pressure difference between the topside and underside of the wings, which changes in magnitude and orientation as the wings flap back and forth. The pressure differences over the wing are essential because they furnish the net aerodynamic force that enables the hummingbird to lift off and hover.

The scientists examined six Anna's hummingbirds, the most common species near Stanford University. One by one, the birds drank sugar water from a fake flower in a special flight chamber. Around the chamber, not visible to the bird, cameras, microphones and pressure sensors were set up to record each wingbeat.

Unlike other species of birds, a hummingbird wing generates a strong upward aerodynamic force during both the downward and upward wing stroke. Both pressure differences contribute to the hum, but it turns out that the upward lifting pressure difference is the primary source.

"This study shows that advances in technology, in this case with innovations made possible by collaborating with a company, enable scientists to make discoveries about how organisms work – with applications that may benefit society," says Kathryn Dickson, a program director in NSF's Division of Integrative Organismal Systems.