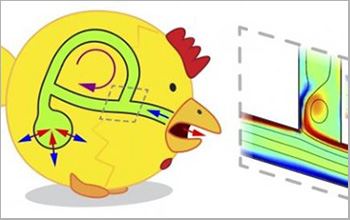 A "spherical chicken" similar to the bird lung, showing air motion during inhalation and exhalation.

Birds breathe with greater efficiency than humans because of the structure of their lungs --looped airways that facilitate air flows that go in one direction -- a team of researchers has found. The results appear in Physical Review Letters.

The U.S. National Science Foundation-funded study, conducted by scientists at New York University and the New Jersey Institute of Technology, points to smarter ways to pump fluids and control flows in applications such as respiratory ventilators.

"Unlike the air flows deep in the branches of our lungs, which oscillate back and forth as we breathe in and out, the flow moves in a single direction in birds even as they inhale and exhale," explains NYU's Leif Ristroph, the senior author of the paper.

"This allows birds to perform the most difficult and energetically costly activity of any animal: They can fly, and they can do so across whole oceans and entire continents and at elevations as high as Mount Everest, where the oxygen is extremely thin. The key is that bird lungs are made of looped airways, not just the branches and tree-like structure of our lungs. We found that this leads to one-way or directed flows around the loops. This wind ventilates even the deep recesses of the lungs and brings in fresh air."

The one-way flow of air in birds' breathing systems was discovered a century ago. But what had remained a mystery was an explanation of the aerodynamics behind this efficient breathing system.

Ristroph points to several potential engineering uses for these findings.

"Directing, controlling and pumping fluids is a very common goal in many applications, from healthcare to chemical processing to the fuel, lubricant and coolant systems in all sorts of machinery," he observes. "In all these cases, we need to pump fluids in specific directions for specific purposes, and now we've learned from birds an entirely new way to accomplish this that we hope can be used in our technologies."