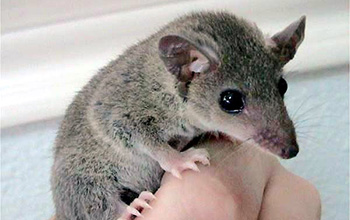 Researchers are looking at opossums for immunological solutions to human diseases.

Scientists have examined the immune system of an unusual group of mammals, which includes a small South American opossum, to find solutions that evolution has produced to fight disease-causing pathogens.

In a paper in the journal Science, an international team of researchers at the University of New Mexico, Monash University in Australia and the U.S. National Institutes of Health has defined a novel T cell lineage, called γµ T cells, found only in marsupials, such as kangaroos and opossums, and monotremes such as the duckbill platypus.

The co-lead author of the U.S. National Science Foundation-funded work is University of New Mexico researcher Kimberly Morrissey. Rob Miller, director of the UNM Center for Evolutionary & Theoretical Immunology, worked with Morrissey on the research.

The immune systems of all vertebrates -- including humans -- contain specialized cells, called T cells, that play a fundamental role in protecting against fungal, bacterial, parasitic and viral pathogens, which can cause diseases such as cancer or COVID-19. For the past four decades, it was generally considered that there were two T cell lineages: αβ or γδ T cells.

"T cells are usually one of two types," said Morrissey. "They either monitor and kill virally infected cells or tumor cells, or they can act as master regulators by activating or suppressing other immune cells. They are a key component in the immune response against specific pathogens and play an integral part in vaccine effectiveness."

Morrissey, Miller and their colleagues examined the immune system of a small South American opossum species, the gray short-tailed opossum Monodelphis domestica, in their research. The biologists looked for similarities and differences to humans.

"We study the immune systems of marsupials, like the opossum, to look for novelty as well as conservation," said Miller. "Novelty would be things that the opossum has that we lack. This gives us insights into evolutionary innovation in some species that are not found in common research models such as mice and rats. Conservation, or ways in which opossums and humans are the same, gives us insight into ancient features that have been preserved over more than 150 million years of evolution and are therefore likely to be fundamentally important."

Added Sam Scheiner, a program director in NSF's Division of Environmental Biology, "To better treat infectious diseases, we need to increase our understanding of how the immune system works. Examining the myriad ways evolution has shaped that system provides unique insights, such as those in this study."