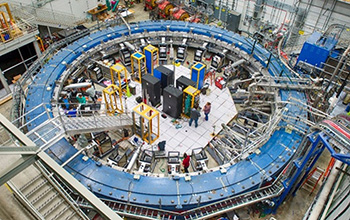 The Muon g-2 ring sits amid electronic racks, the muon beamline and other equipment.

The first results from the Muon g-2 experiment at the U.S. Department of Energy's Fermi National Accelerator Laboratory show fundamental particles called muons behaving in a way that is not predicted by scientists' best theory, the Standard Model of particle physics. The results are published in the journal Physical Review Letters.

The strong evidence that muons deviate from the Standard Model calculation might hint at exciting new physics. One potential explanation is the existence of undiscovered particles or forces. Muons act as a window into the subatomic world and could be interacting with these particles or forces.

The result, made with unprecedented precision, confirms a discrepancy that has been gnawing at researchers for decades.

"The result of our first year of data is the most highly anticipated particle physics result in nearly a decade, and an exceptional accomplishment for the incredibly talented collaboration of experimenters," said Tim Chupp, a physicist at the University of Michigan and leader of the U-M group working on the experiment. The research is funded in part by the U.S. National Science Foundation.

A muon is about 200 times more massive than its cousin, the electron. Muons occur naturally when cosmic rays strike the Earth's atmosphere, and particle accelerators at Fermilab can produce them in large numbers. Like electrons, muons act as if they have tiny internal magnets.

In a strong magnetic field, the direction of the muon's magnet wobbles, or precesses, much like the axis of a spinning top or gyroscope. The strength of the internal magnet determines the rate of the muon precession and is described by a number that physicists call the g-factor. The Standard Model can be used to calculate the g-factor with ultrahigh precision based on known particles and forces.

The Muon g-2 experiment sends a beam of muons into a ring of magnets, where they circulate thousands of times at nearly the speed of light. Detectors lining the ring allow scientists to determine how fast the muons are precessing. As the muons circulate in the Muon g-2 magnet, they also interact with a quantum foam of subatomic particles popping in and out of existence.

Interactions with these short-lived particles affect the value of the g-factor, causing the muons' precession to speed up very slightly. The Standard Model predicts this so-called anomalous magnetic moment. But if the quantum foam contains additional forces or particles not accounted for by the Standard Model, that would tweak the muon g-factor further.

"Particle physicists are again going to turn their attention to what this new physics could be," Chupp said. "For physics, this finding is quite profound because it gives us a much better idea of a specific signal to examine. It's beautiful physics. It challenges us experimentally, and it probes the deepest questions of particle physics."

Added Allena Opper, a program director in NSF's Division of Physics, "The Standard Model is very, very good at predicting our observations of the subatomic world. This result is so exciting because it deviates so clearly from the Standard Model prediction of the muon's g-factor; there has to be some new particle or interaction that affects muons."