Changes in gene activity can link past experience with future behavior 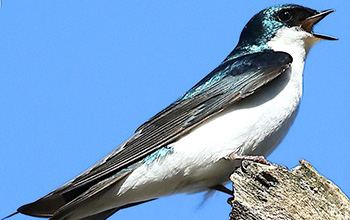 A new study on competition in the wild was performed with tree swallows.

Fighting among social animals is common as they compete for the resources they need to survive and reproduce. A winner and a loser will inevitably result from these interactions, but do these challenges also leave an unseen, lasting mark?

From past work, scientists know that competition changes gene activity in the brain and can even increase aggression, seemingly preparing an individual for future fights. But how does a social challenge continue to affect an individual well after the interaction has ended? No prior experiments have tested how this unfolds among wild animals, and females remain conspicuously absent from studies of competition.

A study by researchers at Indiana University found that competition among free-living female songbirds changed the activity of important genes in the brain related to energy and aggression. Some of these effects lasted for two full days after competition had ended.

Several of these changes in gene activity were related to epigenetic marks. Epigenetic marks chemically modify DNA so that genes are turned on or off without changing the genetic code -- a mechanism capable of linking past experience with future behavior. These results give important insight into how social experiences are encoded in the brain and how they can have long-lasting effects.

The study, funded in part by the U.S. National Science Foundation, was performed with a population of wild tree swallows that breed in artificial cavities (nest boxes). These songbirds are obligate secondary cavity-nesters, meaning they need a cavity to reproduce but, unlike woodpeckers, cannot excavate one themselves.

Results of the study are published in Proceedings of the National Academy of Sciences, and demonstrate the potential for a single day of competition to have lasting effects.

"Biologists are still working through all the ways genes influence behavior," says Jodie Jawor, a program director in NSF's Division of Integrative Organismal Systems. "It's not just what genes you have, but how and whether they are turned on or off that matters."