Taking the vital signs of the global ocean with biogeochemical floats 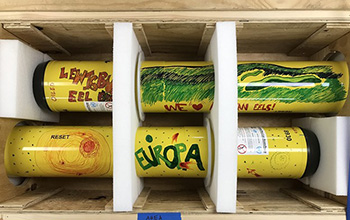 Europa and Lewisburg Eel are two of the first floats deployed in the western North Atlantic.

As the researchers and crew aboard the research vessel Thomas G. Thompson continue to deploy biogeochemical floats in the western North Atlantic, the arrival of the first profile data marks an exciting step forward for the U.S. National Science Foundation-funded Global Ocean Biogeochemistry Array, or GO-BGC, a global robotic network of profiling floats.

The first float deployed for the GO-BGC array was adopted by Fauquier County Public Schools in Warrenton, Virginia, through the Adopt-A-Float program. Students named the float Europa after one of Jupiter's moons, which has an ocean hidden beneath its icy surface.

For the rest of its robotic life, Europa -- and the entire GO-BGC fleet once deployed -- will follow a simple but data-rich pattern: drift through the ocean maintaining a depth of about 1,000 meters (3,280 feet) for 10 days; drop down to 2,000 meters depth (1.2 miles) before returning to the surface; gather data on the vertical ascent; and, when at the surface, transmit its findings by satellite. Europa transmitted the first successful profile about 18 hours after launch. Each float will collect data until its battery dies approximately five years from deployment.

One of the advantages of the floats is their ability to measure the basic biology and chemistry of the ocean. Metrics such as oxygen concentration, pH (ocean acidity), nitrate (an essential nutrient for microscopic algae), sunlight (required for algal growth), chlorophyll (an indicator of algal abundance), and particles in the water (including microscopic algae) will give researchers insights into fundamentals of ocean health -- including primary productivity and growth of phytoplankton, and ocean carbon dioxide uptake from the atmosphere.

"We're trying to find out what the baseline metabolism of the ocean is," said Ken Johnson, a marine chemist at the Monterey Bay Aquarium Research Institute and principal investigator on the project. "If you go to a hospital, they don't immediately put you in an MRI machine; first they take your vital signs."

The first set of floats is being deployed in the western North Atlantic, a region of particular interest to researchers for its role in regulating heat and exchanging carbon with the atmosphere. Paleoclimate models suggest that global warming has weakened and may continue to weaken the Atlantic Meridional Overturning Circulation that drives the North Atlantic.

The GO-BGC array is just one of the tools scientists can use to answer whether weakening of the circulation in the North Atlantic -- if indeed it is changing -- would also impact food webs, ocean respiration and other fundamental processes.