How the Chicxulub impact gave rise to modern rainforests 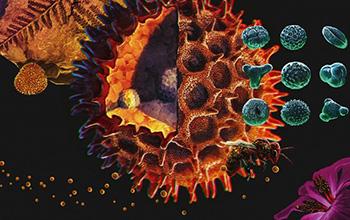 After the asteroid impact that killed the dinosaurs, flowering plants took over tropical forests.

Tropical rainforests today are biodiversity hotspots and play an important role in the world's climate systems. A new U.S. National Science Foundation-funded study published in Science sheds light on the origins of modern rainforests and may help scientists understand how rainforests will respond to a rapidly changing climate in the future.

The project, led by scientists at the Smithsonian Tropical Research Institute, shows that the asteroid impact that ended the reign of dinosaurs 66 million years ago also caused 45% of plants in what is now Colombia to go extinct. But it made way for the reign of flowering plants in modern tropical rainforests.

"We wondered how tropical rainforests changed after a drastic ecological perturbation such as the Chicxulub impact, so we looked for tropical plant fossils," said Mónica Carvalho, first author and a researcher at the Smithsonian Tropical Research Institute and at the Universidad del Rosario in Colombia. "Our team examined over 50,000 fossil pollen records and more than 6,000 leaf fossils from before and after the impact."

In Central and South America, geologists hustle to find fossils exposed by road cuts and mines before heavy rains wash them away and the jungle hides them again. Before this study, little was known about the effect of the asteroid-caused extinction on the evolution of flowering plants that now dominate the American tropics.

To paint a big, regional picture of forests before and after the impact, Carlos Jaramillo, a paleontologist at the Smithsonian Tropical Research Institute, and his team studied pollen grains from 39 sites that include rock outcrops and cores drilled for oil exploration in Colombia.

Pollen and spores obtained from rocks older than the impact show that rainforests were equally dominated by ferns and flowering plants. Conifers, such as relatives of the Kauri pine and Norfolk Island pine, were common and cast their shadows over dinosaur trails. After the impact, conifers disappeared almost completely from the New World tropics, and flowering plants took over. Plant diversity did not recover for some 10 million years after the impact.

The team found evidence that pre-impact tropical forest trees were spaced far apart, allowing light to reach the forest floor. Within 10 million years after the impact, some tropical forests were dense, like those of today, where leaves of trees and vines cast deep shade on the smaller trees, bushes and herbaceous plants below.