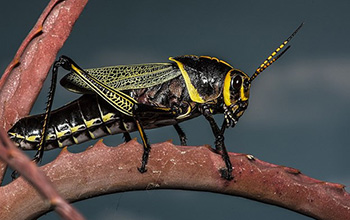 The expansion of artificial night lights globally has had important impacts on animal behavior and health. A new study led by researchers at the University of Oklahoma on the effects of bright city lights on grasshoppers appears in the journal Biology Letters.

Elske Tielens is lead author. "Nocturnal city lighting elicits a macroscale response from an insect population," she said. "It's the first analysis of lights at night on insect movement at regional scales."

The study was supported by the U.S. National Science Foundation.

Analyzing weather surveillance radar data in June and July 2019, Tielens and colleagues found that some 45 million grasshoppers -- a "biblical plague" -- took flight during the peak time, concentrating over city lighting such as the Las Vegas strip. The researchers also found daily movement cycles of ascent at dusk toward lit urban areas.

This study is novel, Tielens said, because the effects of artificial lights at night on insects at large scales have not been documented in a quantitative way. It shows how insects are interacting with the landscape, including with human-made environments. Since people continue to influence the environment, it's important to understand the effects of artificial light on insect populations, the researchers said. The knowledge can help scientists conserve the diverse world of insects, as well as manage important pest species.

Using weather radar to follow how insects respond to artificial night lights hasn't been done before, according to the scientists. "We know that the airspace just above us is an essential habitat for most animals, but we don't know much about how our activities are impacting life in the air," said co-author Jeffrey Kelly. "This study reveals that the effects of artificial light at night on grasshopper behavior are pervasive at a large scale."

Added Doug Levey, a program director in NSF's Division of Environmental Biology, "Our incredibly widespread use of lights to see better at night has likely generated all sorts of effects that we don't see. Grasshoppers flying over cities may turn out to be the tip of an ecological iceberg."