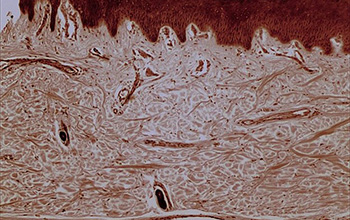 Scientists have discovered how humans evolved a super-high cooling capacity.

Humans have a uniquely high density of sweat glands embedded in their skin -- 10 times the density of chimpanzees and macaques. Now, researchers at Penn Medicine and other institutions have discovered how this distinctive, hyper-cooling trait evolved in the human genome.

In a study funded in part by the U.S. National Science Foundation and published in Proceedings of the National Academy of Sciences, the scientists showed that the higher density of sweat glands in humans is due, to a great extent, to accumulated changes in a regulatory region of DNA that drives the expression of a sweat-gland-building gene. The discovery explains why humans are the sweatiest of the Great Apes.

"This is one of the clearest examples I've seen of pinpointing the genetic basis for one of the most distinctively human evolutionary traits," said the study's senior author, Yana Kamberov.

Added Rebecca Ferrell, a program director in NSF's Division of Behavioral and Cognitive Sciences, "The discovery of a single genetic region with multiple mutation events in humans suggests that our ability to sweat was a very important adaptation during hominin evolution. As more studies of this kind are conducted, we are likely to learn even more about the timing of, and relationship between, multiple adaptive traits that make us human."

Scientists assume that humans' high density of sweat glands reflects an ancient evolutionary adaptation. That adaptation, coupled with the loss of fur in early hominins (which promoted cooling through sweat evaporation), is thought to have made it easier to run, hunt and otherwise survive on the hot and relatively treeless African savanna, a markedly different habitat from the jungles occupied by other ape species.

The activity of a gene is often affected by nearby regions of DNA called enhancer regions, where factors that activate the gene can bind and help drive the gene's expression. In the study, Kamberov and her team identified an enhancer region of a gene that results in the formation of more sweat glands in human skin. The researchers showed that the human version of this enhancer region is more active than ape or monkey versions.

The work suggests that the human "high-sweat" trait evolved at least in part through repeated mutations to just one regulatory region. This single regulatory element could have repeatedly contributed to a gradual evolution of higher sweat gland density during human evolution.

While the study is mainly a result of fundamental biology research that shines a light on human evolution, it also should have long-term medical relevance, Kamberov said. "Severe wounds or burns often destroy sweat glands in skin, and so far we don't know how to regenerate them -- but this study brings us closer to discovering how to do that."