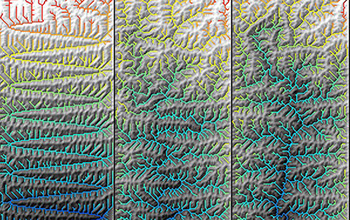 Satellite views of Earth's major river systems reveal their familiar treelike drainage patterns. The pattern -- called dendritic -- and its prevalence suggest that it may be the optimal state in which rivers exist.

Challenged by the knowledge that numerical models of drainage evolution have yet to substantiate this assumption, researchers are now thinking of rivers as existing in a persistent reorganizational state instead of being in a set, stable configuration. Understanding this has implications for land use and infrastructure management decisions.

A U.S. National Science Foundation-funded study by Jeffrey Kwang of the University of Massachusetts Amherst, Abigail Langston of Kansas State University and Gary Parker of the University of Illinois Urbana-Champaign takes a closer look at the vertical and lateral -- or depth and width -- components of river erosion and drainage patterns. The results are published in Proceedings of the National Academy of Sciences.

"A tree's dendritic structure exists to provide fresh ends for leaves to grow and collect as much light as possible," Parker said. "If you chop off some branches, they will regrow in a dendritic pattern. In our study, we wanted to find out if river systems behave similarly when their paths are altered, even though existing numerical models cannot replicate this."

Added Kwang, "Our work shows that lateral migration of channels, a mechanism commonly ignored in landscape evolution models, has the potential to restructure river networks drastically."

The team plans to examine the role that sediment type and geologic features such as mountains, faults and fractures play in this process. There are places where the underlying geology has an enormous influence on drainage patterns, the researchers said, and accounting for them in models is needed.

Understanding how rivers evolve naturally or rebound after engineering measures have rerouted them will help decision-makers plan future land use, the scientists believe.