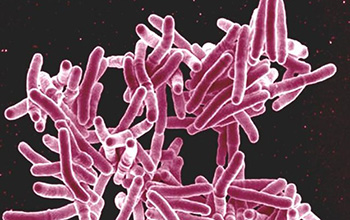 Scanning electron micrograph of Mycobacterium tuberculosis bacteria, which cause TB.

Six years ago, scientist Michael Niederweis described the first toxin ever found for the deadly pathogen Mycobacterium tuberculosis. The toxin, tuberculosis necrotizing toxin or TNT, became the founding member of a novel class of previously unrecognized toxins present in more than 600 bacterial and fungal species.

As M. tuberculosis bacteria survive and grow inside their human host, the toxin is released. For 132 years, the lack of an identified toxin in M. tuberculosis contrasted with nearly all other pathogenic bacteria whose toxins contribute to illness or death. M. tuberculosis infects 9 million people a year and kills more than 1 million.

Now, in U.S. National Science Foundation-funded work, the University of Alabama at Birmingham researcher and his colleagues describe how two small ESX proteins made by the M. tuberculosis bacteria mediate the secretion of TNT by pore formation in the membranes that envelop the bacteria.

The finding may have broad application because a distinctive three-amino acid motif found on EsxE and EsxF -- tryptophan/any-amino-acid/glycine, known in shorthand as WXG -- is also found on many other small mycobacterium proteins and on the large WXG100 superfamily of bacterial proteins that resemble EsxE and EsxF.

Electron microscopy data analysis was performed on the university's Cheaha supercomputer platform, which is supported by NSF. The results are published in Nature Communications.

"Here, we show for the first time that small Esx proteins of the WXG100 family have an important molecular function by mediating toxin secretion," said Niederweis. "Our study represents a major advancement in understanding TNT and other proteins in M. tuberculosis."