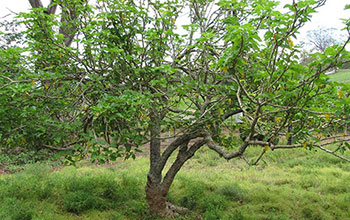 Curcusone D, from the root of a shrub native to the Americas, shows promise in combating cancer.

A chemist at Purdue University has found a way to synthesize a compound to fight a previously "undruggable" cancer protein. The compound shows promise in treating a myriad of cancer types.

The U.S. National Science Foundation-funded research was published in the Journal of the American Chemical Society.

Chemist Mingji Dai, inspired by a rare compound found in a shrub native to North America, studied the compound and discovered a cost-effective and efficient way to synthesize it in the lab.

The compound -- curcusone D -- has the potential to help combat a protein found in many cancers, including some forms of breast, brain, colorectal, prostate, lung and liver cancers. The protein, dubbed BRAT1, had previously been deemed "undruggable." In collaboration with Alexander Adibekian of the Scripps Research Institute, Dai and his team linked curcusone D to BRAT1 and validated curcusone D as the first BRAT1 inhibitor.

Curcusones are compounds that come from a shrub named Jatropha curcas, also called the purging nut. Native to the Americas, it has spread to other continents, including Africa and Asia. The plant has long been used for its medicinal properties -- including the treatment of cancer -- as well as being a proposed inexpensive source of biodiesel.

Dai and colleagues were interested in the compounds curcusone A, B, C and D. "We were very interested by these compounds' novel structures," Dai said. "We were intrigued by their biological function; they showed potent anti-cancer activity and may lead to new mechanisms to combat cancer."

The researchers tested the compounds on breast cancer cells and found that curcusone D is extremely effective at shutting down the cancer cells.

The BRAT1 cancer protein regulates DNA damage response and DNA repair in cancer cells, which grow very fast. Their growth can be stopped, however, if scientists can damage the cells' DNA and keep them from repairing the damage.

"Our compound can kill these cancer cells and it can stop their migration," Dai said. "If we can keep the cancer from metastasizing, the patient can live longer."