Extinct 'horned' crocodile gets new spot on the tree of life 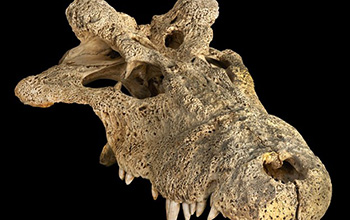 A skull of the extinct horned crocodile from Madagascar (Voay robustus).

A study led by scientists at the American Museum of Natural History has resolved a long-standing controversy about an extinct "horned" crocodile that likely lived among humans in Madagascar.

Based on analysis of ancient DNA, the research findings show that the horned crocodile was closely related to "true" crocodiles, including the famous Nile crocodile, but on a separate branch of the crocodile family tree.

The U.S. National Science Foundation-funded study, published in the journal Communications Biology, contradicts the most recent scientific thinking about the horned crocodile's evolutionary relationships and suggests that the ancestor of modern crocodiles likely originated in Africa.

"This crocodile was hiding out on the island of Madagascar during the time when people were building the pyramids, and was probably still there when pirates were getting stranded on the island," said lead author Evon Hekkala of Fordham University and the American Museum of Natural History. "They blinked out just before we had the modern genomic tools available to make sense of the relationships of living things. And yet, they were the key to understanding the story of all the crocodiles alive today."

Despite nearly 150 years of investigation, the position of the horned crocodile on the tree of life has remained controversial. In the 1870s, it was first described as a new species in the "true crocodile" group, which includes the Nile, Asian and American crocodiles. Then in the early part of the 20th century, it was thought that specimens represented very old Nile crocodiles.

Finally, a study based on physical characteristics of fossil specimens concluded that the horned crocodile was not a true crocodile, but in the group that includes dwarf crocodiles.

The newest results place the horned crocodile right next to the true crocodile branch of the evolutionary tree, making it the closest species to the common ancestor of the crocodiles now living.