Why our brains miss opportunities to improve through subtraction

Researchers explain why people rarely remove something as a solution 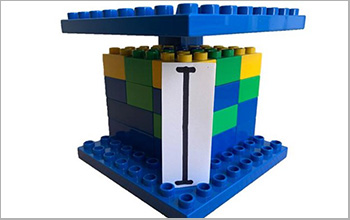 How would you stabilize this Lego structure to support a brick placed on top?

If, as the saying goes, less is more, why do we humans overdo so much?

In a U.S. National Science Foundation-funded paper in the journal Nature, University of Virginia researchers explain why people rarely think of removing something as a solution when looking at a situation, object or idea that needs improving. Instead, people almost always add some element, whether it helps or not.

The team's findings suggest a fundamental reason for several problems: why people struggle with overwhelming schedules; why institutions become bogged down in red tape; and, of particular interest to researchers, why humanity is exhausting the planet's resources.

"It happens in engineering design, which is my main interest," said co-author Leidy Klotz. "But it also happens in writing, cooking and everything else -- just think about your own work and you will see it. The first thing that comes to our minds is, what can we add to make it better. Our paper shows that we do this to our detriment, even when the only right answer is to subtract. Even with financial incentives, we still don't think to take away."

Klotz, whose research explores the overlaps between engineering and behavioral science, collaborated with other researchers on a series of observational studies and experiments to understand the phenomenon.

When considering two broad possibilities for why people systematically default to addition -- they generate ideas for both possibilities and disproportionately discard subtractive solutions, or they overlook subtractive ideas altogether -- the researchers focused on the latter.

"Additive ideas come to mind quickly and easily, but subtractive ideas require more cognitive effort," co-author Benjamin Converse said. "Because people are often moving fast and working with the first ideas that come to mind, they end up accepting additive solutions without considering subtraction." The researchers think there may be a self-reinforcing effect.

"These findings have important implications for the design of new technological and other systems and devices," said Bruce Hamilton, a program director in NSF's Directorate for Engineering.