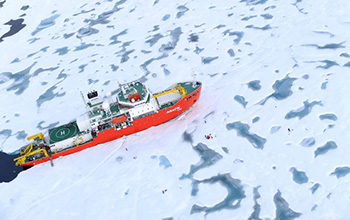 The Korean icebreaker Araon, which unexpectedly found itself in an Arctic cyclone.

In August 2016, a massive storm on par with a Category 2 hurricane churned in the Arctic Ocean. The cyclone led to the third-lowest sea ice extent ever recorded. What made the Great Arctic Cyclone of 2016 especially important to scientists was the proximity of the South Korean icebreaker Araon.

For the first time, U.S. National Science Foundation-funded researchers were able to see exactly what happens to the ocean and its sea ice when a cyclone hits. University of Alaska Fairbanks researchers and their colleagues have published a new study in Geophysical Research Letters showing that the sea ice declined 5.7 times faster than normal during the storm. They also found that the rapid decline was driven by cyclone-triggered processes in the ocean.

There was general speculation that sea ice declined solely from atmospheric processes melting ice from above. Zhang and his team proved that this theory is incomplete using observations from directly inside the cyclone. The measurements reflected air and ocean temperature, radiation, wind and ocean currents.

It was a stroke of good luck for science, and perhaps a bit nerve-racking for those onboard, that the icebreaker was in position to capture data from the cyclone. Usually, ships try to avoid such storms, but Araon had just sailed into the middle of an ice-covered zone and was locked in an ice floe.

Thanks to the ship's position so close to the storm, the scientists discovered that cyclone-related sea ice loss is primarily due to two physical oceanographic processes.

First, strong spinning winds force the surface water to move away from the cyclone, drawing deeper warm water to the surface. Despite the upwelling of warm water, a small layer of cool water remains directly beneath the sea ice. That is where a second process comes into play: The strong cyclone winds act as a blender, mixing the surface water.

Together, the upwelling of warm water and the surface turbulence warm the entire upper ocean water column and melt the sea ice from below.